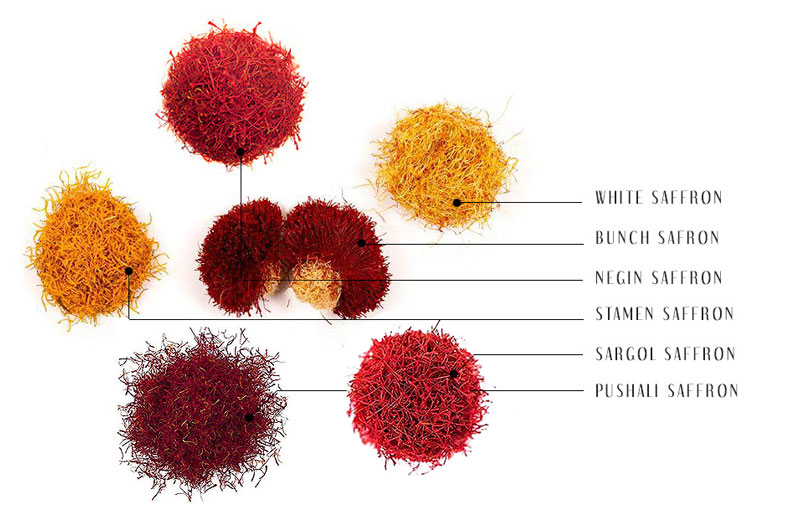 what are the different types of saffron?

Saffron is classified by various criteria including physical characteristics, the area where it’s been cultivated, its quality, coloring power, and aroma in the world.
But the most valid classification that has been accepted by all countries producing and consuming saffron is the ISO 3632 standard.
In this article, we will introduce and explain the different types of saffron based on this classification.

Eyjan saffron company can supply all types of Iranian saffron which are Negin, Sargol, Pushal, and Daste/Bunch, in the quality above the standard level in bulk and different retail boxes, and unlimited quantity.

Negin saffron is the best, highest quality, and most expensive type of saffron that has many fans all over the world.
In Negin saffron, which is a special type of Pushal saffron, the red and thick stigmas of the stigma are separated from the existing filaments without the creamy part (yellow) and there is no yellowness in it. 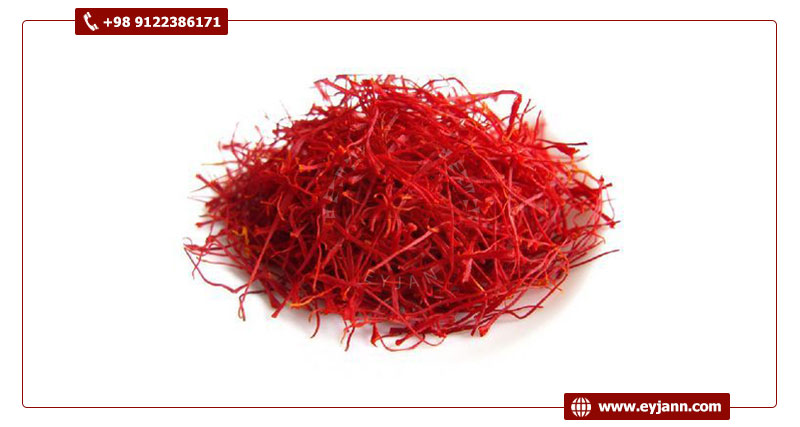 Negin saffron itself is divided into the following types based on some of its characteristics:

This type of saffron is pressed during processing and its strands become flat.

Super Negin Saffron is the most well-known and famous among the types of saffron. The best option for export due to the quality, color, and excessive size of its saffron stigmas is Super Negin saffron.

This saffron has a good quality and a more reasonable price.

This type has a lower quality than other types of Negin saffron, but it has a more reasonable price.

Although Negin saffron and Sargol saffron are both composed only of the stigma, and the white and yellow parts are completely separated, also Sargol saffron has the same color and aroma as Negin saffron, but there are some differences in their appearance.
In Negin saffron, the saffron threads are longer and trimmed perfectly to eliminate any yellow part and broken strands. Negin is all-red in color and contains little to no crumbs.
So customers who pay a lot of attention to the appearance of saffron, often choose Negin saffron even though it is more expensive.

Eyjan company carries out all the processes of planting, harvesting, and drying with help of skilled personnel and advanced machinery with consider health principles following the standards and offer you first-class and original Super Negin saffron and other types of saffron.
Other factors must be considered in order to finally consider saffron as really an export. The color of saffron is another of these factors.

Negin saffron is graded based on its quality

First-class saffron: It is the best type of saffron. The stigmas are large and separated and there is no indentation.

Due to the sensitive and complex production process and its high quality, it is more expensive than all other types of saffron and different prices are considered for it depending on the quality.

Sargol is export saffron, high quality and suitable for cooking that many restaurants choose. The aroma and color of Sargol saffron are so great that a small amount of it can make food or tea very colorful and fragrant because the percentage of crocin and safranal in this type is very high.

The similarity between Sargol and Pushal

In some cases, Pushal saffron is also called Sargol, in which case it is divided into two types: Sargin Negin and Sargol Mumtaz.

Fraud is more often in Sargol saffron than other kinds. It is possible to make the yellow and white parts of saffron red with artificial colors and sell them as stigmas. These cases also have many disadvantages. Therefore, it is better to be careful enough to buy Sargol and buy it from reputable and reliable people and brands.

Sargol saffron is obtained by cleaning Daste saffron and Sargol saffron, and there is definitely a certain amount of breakage and crushing during this operation.

Therefore, based on the number of crumbs, saffron is divided into different grades.

High-quality Sargol saffron has a stigma (red part) without yellow and white parts. The stigmas should not stick together and the best type has more red color. The more of these characteristics and the longer the stigma, the better the saffron.

The price of this type of saffron is higher than other types of saffron except for Negin saffron. But Sargol saffron itself is also offered at different prices based on its characteristics. The lower the number of crumbs, and the taller the stigmas, the higher the price. 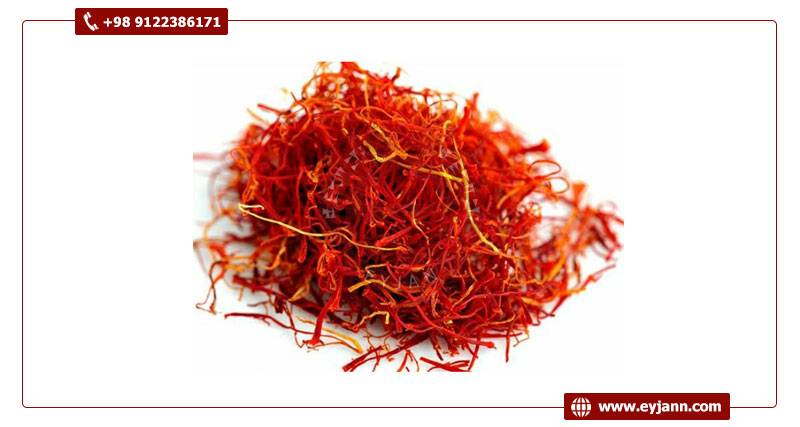 When hearing the name of saffron, most people think of only red, uniform stigmas. While there is a type of saffron called Pushal, which includes the red part of the stigma and the yellow part called the cream.

Saffron root has extraordinary properties, but it is not very acceptable for foreigners for export. For this reason, saffron usually tries to remove the root of the so-called saffron. Sargol saffron is saffron that has only the red parts of saffron and there is no more news about its roots. But the saffron root can remain like a whitetail during the saffron flowering and complete separation of the roots. This saffron is called Pushal saffron.

In Pushal saffron, the saffron cream (white part) is separated from under the flower, so that the stigmas will have 2-3 mm of cream. At the end of the stigmas of the three branches of saffron, there is some yellow or white, which gives it a Pushal-like shape; That is why saffron is called Pushal.

Pushal saffron is divided into two types of puffed Pushal and ordinary Pushal.

Pushal saffron that has thick and smooth stigmas, no wrinkles, and has less cream (root) is called Pushal, and Pushal saffron, which has a normal stalk and is eaten with more cream, is called ordinary Pushal.

This model of saffron is graded from 1 to 3 based on the coarseness and sagging of the stigma and the amount of cream attached to it.

Pushal saffron is divided into three general categories based on quality.

The price of Pushal saffron is higher than the Dasteh saffron, but it is considered cheaper than saffron and Negin saffron.

It has a lower price than Negin saffron and Sargol saffron. 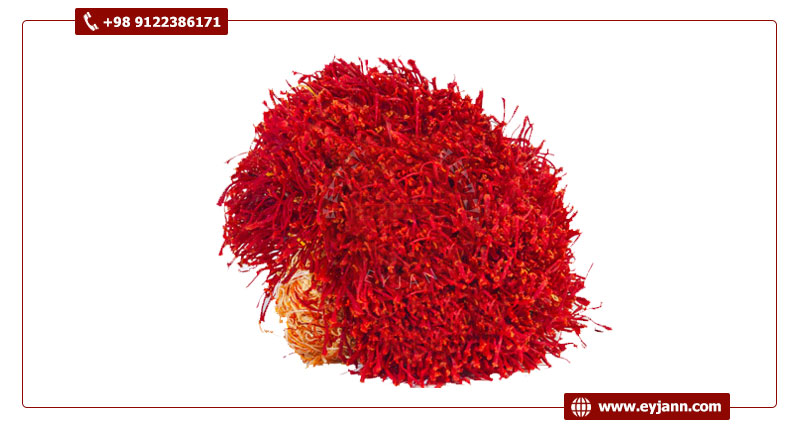 Saffron is composed of whole strands, each of which has a stigma (red part), cream (yellow part), and roots (white part) together, and the whole string is arranged and dried. Saffron (including stigma, cream, and roots) is prepared by hand.

So that the yellow part is about 30 and the red part is about 70% of it. In this type of classification, saffron is intact and the stigmas of the three branches of saffron are not separated from the white part of the saffron (or saffron cream).

Saffron, which is also known as full-bodied saffron, is one of the types of saffron that is known as the most original and best type of saffron.

Usually, the two-way method is more attractive from the customers’ point of view, because the red part of the saffron strings (stigma) around the product is more beautiful.

Saffron is called 4th-grade saffron in the classification of the National Organization for Standardization and also the standard 1-259.

In addition to the fact that the possibility of fraud in batch saffron is very low, it is generally known as the best type of genuine saffron.

The price of Bunch saffron is cheaper than other types of saffron, and the reason for this is the presence of impurities (yellow and white part) in this type of classification.

Therefore, it is the best and most economical type for home use. 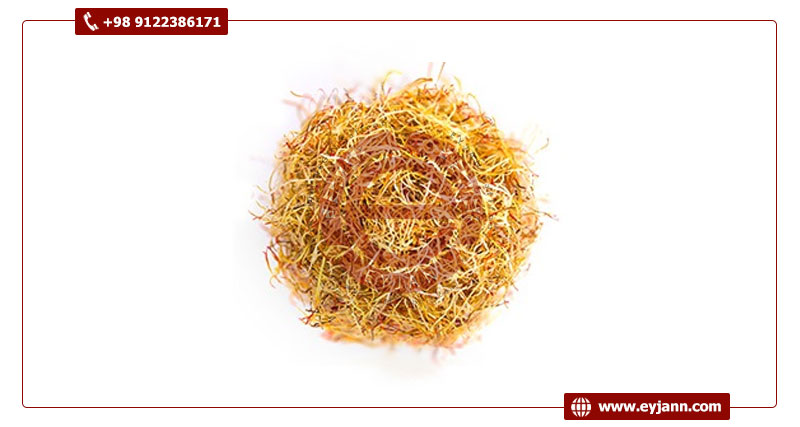 Konj saffron is not considered a category of saffron.

When cleaning saffron and removing the saffron stigma to prepare Negin saffron, the root or white part, which in Iran is called the Konj saffron or white saffron, remains; This part is known in Europe as white or style (cream).

It is widely believed that saffron root has more fragrance, but scientific studies and analyzes show that the valuable ingredients of saffron are found only in its red stigma.

One of these substances is crocin, which moves from the red stigma to the white root inside the saffron plant, and because the saffron cream part has more moisture, it causes more aroma to be inhaled from the saffron root.

Saffron root does not contain crocin (responsible for saffron coloring) but has the properties of red saffron.

Konj saffron is composed of the lowest part, ie the root part. Most counterfeiters use this type of saffron to cheat saffron and sell it by staining it with the color of a stigma so that they dye it as saffron. They sell red, but white saffron itself has its properties.

Therapeutic uses in traditional medicine and industrial uses such as cosmetics are also among Konj Saffron‘s consumptions.

The price of white saffron is considered less than other types of saffron, which are used more in the productivity of the stigma.

This type of saffron is also sold in the market and although its color is low, it has the real aroma and taste of saffron. Whiteness is the best type of saffron for use in tea and tea, as well as the flavoring and aroma of food.

Eyjan company with its more than 20 years of brilliant history, which originated from honesty and faithfulness as well as focusing on export premium saffron has no competitors in the freshness of its (dried) saffron and due to the highest demand comparing other brands and producers, we believe that we are the best Iranian Saffron wholesaler.

We have no limitation on the wholesale saffron in Iran, so if you order the Negin Saffron in one season of the year and ask for another kind of Saffron in another season, there are always large quantities of saffron available.

Eyjan Saffron Company offers the purest and highest quality of all types of saffron in unlimited quantities and different packaging. If you are going to buy wholesale saffron from Iran, for more information and free consult please contact us.